My previous trip along the San Francisco Bay Trail ended with a walk up Hegenberger Road with a flat tire to get to the Oakland Coliseum BART. This time, I rode down Hegenberger with a new steel-belted front tire watching out for broken glass and other sharp objects. Between Oakland and Richmond the path is mostly paved and car-free, offering $10 million views of the bay, San Francisco, the Berkeley hills, and eastern Marin.

I picked up the Bay Trail at Martin Luther King Jr. Regional Shoreline and followed it north, crossing over the Hall St. bridge into Alameda. I took a side trip down Park Street in Alameda’s historic business district that has the look of early 20th century main street that always appeals to me, saving the Bay Trail along the shoreline of Robert Crown Memorial State Beach for another day.

To get back to the Oakland side of the trail, I took the tunnel under the estuary. This is the worst of this part of the trail. The traffic noise can be deafening and the tunnel’s pedestrian curb is barely wide enough to push a bike along; you cannot ride it.

I followed Mandela Parkway to Eastshore State Park, extending from Emeryville, past the Berkeley Marina and Point Isabel. Point Isabel is where Kay Kerr watched, in 1959, as the hill top was being bulldozed into the bay. The City of Berkeley was planning to double in size using shoreline fill-in. In reaction, Kay Kerr co-founded the Save the Bay Association founded, said to be this area’s first modern grass roots environmental movement. Not only did the Save the Bay Association prvent the 1959 fill-in, it was instrumental in passing a legislative moratorium on bay fill in 1965, in creating the Bay Conservation and Development Commission in 1969, and over five decades of activism on behalf of the bay. Save the Bay is also actively involved in the creation and maintenance of the Bay Trail.

As I continued into Richmond I found several sights that caught me completely by surprise, that shouldn’t be missed:

The Rosie the Riveter Memorial is an abstract, full-length sculpture of a WWII Liberty ship. The Kaiser Shipyards could produce one Liberty per day. Workers were recruited from around the country, increasing Richmond’s population 400% within months. A factory photo of worker Geraldine Hoff  Doyle was used to create the famous “We Can Do It” posters.

One of the few remaining Victory ships, the Red Oak Victory Ship, is restored and docked in shipyard #3. It was named after the Iowa city of Red Oak which suffered the highest per capita casualty rate of any American community during the war. The ship supplied ammunition to the Pacific fleet without a single casualty. The Red Oak is maintained by the Richmond Museum of History and open for public tours.

xx
Several other home front structures are nearby, including a once abandoned now completely rejuvenated Ford (jeeps) assembly plant.

The Wapama (built 1915) is the only schooner left of hundreds once used in the bay. The sheltered deck and exposed hull gives this ship the look more of Noah’s Ark than a schooner. It is an National Historic Landmark housed by the San Francisco Maritime Park Association. It lacks the funds for a complete restoration and can not be boarded. 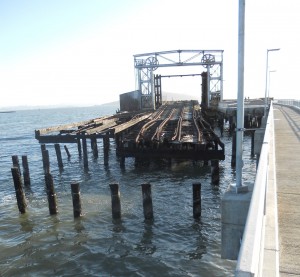 The trail leads through Miller/Knox Regional Shoreline to Ferry Point in Point Richmond. The tracks in this photo once brought passengers and freight from as far as Chicago, IL, which connected to San Francisco via a railcar float. Much of the traffic across the bay was controlled by the Santa Fe Railroad, which opposed building the Golden Gate and Bay bridges. 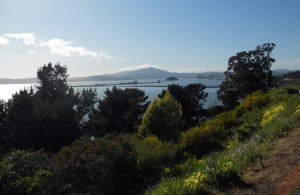 The hills just above Point Richmond are too steep to ride up or down but well worth the climb carrying a bike. The San Raphael Bridge is to the right of Mt. Tamalpais in the background of this photo.

I caught the BART at the Richmond station for the trip back home. Fortunately, I did this before commuting hours when bikes aren’t allowed. Don’t get in the lead car, even if it has a space marked for bikes. Its also not allowed, as the operator will soon have you realize.

When Grandy is not riding his bike, he is a senior technical writer at Phoenix Technical Publications. Phoenix Tech Pubs has provided complete technical writing and documentation services in Oakland and the San Francisco Bay Area for over 25 years.