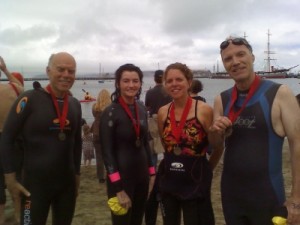 Once again, this has turned out to be one of my favorite events. It’s the third time I’ve done it, and I’ve been very lucky that each time the water was relatively calm. This year’s swim was particularly fun because I swam with my niece, my younger brother and sister, and quite a few friends from the San Jose Swim and Racquet Club.

My brother, my niece, and I had made arrangements to stay up in the city the night before the swim. So we got together for dinner at Greens restaurant in the Marina District. It was the perfect place to fuel up and psych up for the race. The food was excellent as always, and the restaurant is on a pier in Fort Mason, with a great view of the Golden Gate Bridge. Looking at that large expanse of cold open water certainly works up an appetite and I had no problem eating. My niece added the entertaining bit of news that a whale dragged dead into the Port of Oakland two days earlier was drawing sharks.

That night I slept well knowing I’d kept up with my training program. I also reminded myself that the distance was shorter by nearly 1/2 mile. This time I’d be swimming into Aquatic Park, rather than to the East beach, which is just beyond the Golden Gate Yacht Club.

The next morning the streets were wet from a very heavy fog/light rain. But most importantly it was calm, which meant no heavy swells to fight or whitecaps tossing unexpected fist-fulls of water in my face. Everyone gathered at the South End Rowing Club (which hosts the event) for instructions, followed by a short 1/2 mile walk to the boat. It’s the only time I’ll walk down that street barefoot! I hope it was a thrill for the tourists, watching nearly 600 swimmers walk by, most in wetsuits but many not. After a few last-minute instructions, we boarded the boat for the ride out. It doesn’t take long to get to the island, but we had a 20–30 minute wait for conditions to be just right before they’d let us jump.

There were two doors available for the jump from the boat. Unfortunately, the timing mat for one of the exits was broken. So the choice was a quicker exit from the side with the broken mat or a long wait with those wanting an exact swim time. I chose the quicker exit, because I’m not a good swimmer and my time isn’t important to me. I waited about 5 minutes before it was my turn to jump. There’s no hesitation at that point…volunteers at the door scream at you to hurry up and jump. They need to get everyone in the water fast so it’s a closer bunch of swimmers, which is easier to monitor. They also need to get the boat back into port, since it’s an expensive rental.

Once I hit the water, it seemed to take forever to rise to the surface. It’s a shock because the water is so cold. And then the heart really starts pumping. You have time to think about someone possibly jumping on top of you. And you have that moment of doubt that you can make it. You can’t get back on the boat; it’s deck is about 6 feet above you. You could swim to the island, but it doesn’t look real friendly. The only real option is to just get started. The calm sets in as soon as you start swimming. Then it’s just swim, swim, swim, stopping periodically to make sure you’re heading to shore and not out the Golden Gate.

Previously I’d sighted on Sutro Towers, which got me to East Beach. Those are the massive TV towers located on the highest hill in San Francisco. They’re visible from anywhere on all but the most foggy days. But this time the swim was into Aquatic Park, and the sight line was the ship Jerimiah O’Brien. Unfortunately, the day was very grey, the wharf was very grey, and the ship was very grey. So most of the time I couldn’t see it. I did a lot of wandering.

The distance to Aquatic Park is nearly 1/2 mile shorter than that to East beach. But the problem isn’t the distance…it’s dealing with the currents. As it turned out, my swim time was very near what it was the previous two times. I came in 493 out of 564 swimmers, 35th in my age group. Time from starting gun: 1:01:57.

One last note. The featured guest of the swim was Jackie Cobell, 56 years old, who holds the world record for the longest English Channel crossing. She was invited because of her endurance; it took her over 28 hours. For me, that is truly inspirational.

When Jim is not training or participating in endurance events he is the owner of Phoenix Technical Publications. Phoenix Tech Pubs has provided complete technical writing and documentation services in Sunnyvale and the San Francisco Bay Area for over 25 years.